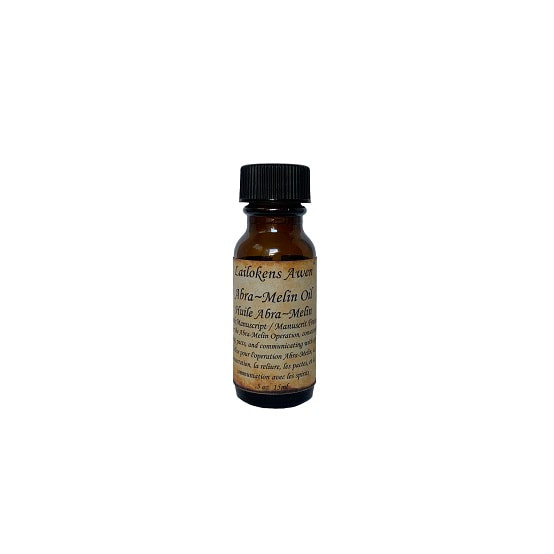 This anointing oil is taken from the 'Book of Abra-Melin', which tells the story of an Egyptian magician who taught a system of magic to Abraham of Worms, c1362-1458. The story involves Abraham passing his magical and Kabbalistic secrets on to his son, and tells how he acquired his knowledge. Abraham recounts how he found Abra-Melin the Mage living in the desert outside an Egyptian town, Arachi or Araki, which borders the Nile. Abra-Melin's home sat atop a small hill surrounded by trees. He was an Egyptian mage and taught a powerful form of Kabbalistic magic to Abraham. He was a "venerable aged man", and very courteous and kind. He discussed nothing but "the Fear of God", the importance of leading a well-regulated life, and the evils of the "acquisition of riches and goods."

Abra-Melin extracted a promise from Abraham that he would give up his "false dogmas" and live "in the Way and Law of the Lord." He then gave Abraham two manuscript books to copy for himself, asking for ten gold florins, which he took with the intention of distributing to seventy-two poor persons in Arachi. Upon his return fifteen days later, after having disposed of the payment money, Abra-Melin extracted an oath from Abraham to "serve and fear" the Lord, and to "live and die in His most Holy Law." After this, Abra-Melin gave Abraham the "Divine Science" and "True Magic" embedded within the two manuscripts, which he was to follow and give to only those whom he knew well.

This is the 'Mathers' recipe, from his mistranslation of a French manuscript. The substitution of Galangal for Calamus in the French manuscript version changes the symbolism associated with the oil from fertility to union with the absolute.

Use for the Abra-Melin Operation, for consecrating magical tools, bindings, pacts, and communicating with spirits. Made on the day and in the hour of the Sun.